The Street Department is responsible for maintenance of approximately 75 miles of street rights-of-way. The department maintains the street surface, traffic signs and pavement marking, curb and gutters, sidewalks, and the surface and subsurface storm drain systems. They also oversee street sweeping and removal of hazards that may interfere with the safe passage of vehicles, pedestrians and bicyclists. 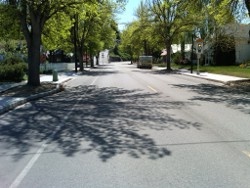 The transportation system is a vital component of Cashmere’s social, economic, and physical structure. On the most basic level, it enables the movement of people and goods throughout the City and mid Wenatchee River Valley. Long term it influences patterns of growth and economic activity by providing access to different land uses. Planning for the development and maintenance of the transportation system is a crucial activity for promoting the efficient movement of people and goods, for ensuring emergency access, and for optimizing the role transportation plays in attaining other community objectives.

The City of Cashmere has a well defined arterial network that has been included in the roadway classification plan for the State of Washington. The Federal Aid network for Cashmere provides an excellent framework for the needed traffic circulation. The routes on the Federal Aid system are eligible to compete for various external funding programs. Below are the federal aid classifications.

Regional transit service is currently provided by Link Route 22. The service operates from approximately 5 am until approximately 8 pm. The service is on approximately an 80 minute headway. The route, with two exceptions, operates between Wenatchee and Leavenworth with a loop through the Central Business District. A single morning and a single evening loop are provided for commuters and serve the eastern portion of the City. A full service schedule is provided Monday through Friday, and a reduced level of service is provided on Saturday.

Cashmere is bisected by the Burlington Northern – Santa Fe Mainline (BNSF). The rail line is one of the original routes that provided train service to the Pacific Northwest. It was originally constructed by the Great Northern Railroad in the late 1800’s as part of the western expansion. The Great Northern was succeeded by Burlington Northern Railroad, later BNSF. The train does not stop in Cashmere.

The Cashmere-Dryden Airport lies immediately southwest of the urban area. It is used by private aircraft and there is no scheduled airline service. Although located outside of the urban growth area, the aircraft approach and departure routes for the airport are over portions of the city and on final approach fly directly over sports fields and parking lots at Cashmere Middle School and Cashmere High School. Flight safety issues should be considered for any future development proposed directly under the landing-takeoff route.