In 1863, a Catholic missionary, Father Respari, came to 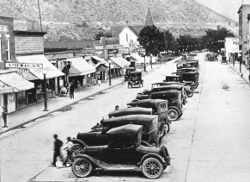 the area to convert the local Native Americans at a place they called N’tuatckom (the Marsh). On the east bank of tumbling creek, a mile upstream from its confluence with a rushing river, he built a one-room log mission. For 20 years he dedicated himself to his task before being succeeded by Father Grassi, who carried on his work.

In 1881, Alexander Brender, a German immigrant, arrived as the first white settler and filed a claim in what is still called Brender Canyon. In 1889, a post office, identified as Mission, was established. In 1892, with the slow, but steady arrival of settlers, a town began to form with the opening of a general store.

When the Great Northern Railroad route was planned through Mission, the town was platted. Soon it was discovered that this name competed with several other towns named Mission in the state. At the urging of Judge Chase, the citizens changed the name to Cashmere, after the beautifully mountainous Vale of Kashmir in northwest India.

The town was incorporated on July 1, 1904. Telephone lines were installed in 1909, paved walks in 1913, electric lights in 1914, and paved streets in 1919. In a few short years, with the construction of major irrigation canals, Cashmere blossomed forth from barren sagebrush desert into one of the most beautiful and productive agricultural areas in the Wenatchee Valley. The name “Mission” still survives in the names of streets, roads, businesses and the creek, which tumbles down out of the mountains from the south and passes through town to join the Wenatchee River.

The City of Cashmere, the acknowledged geographical center of Washington State, is located at the foot of the picturesque Cascade Mountains. Dominating the view to the west is Mount Cashmere, rising to 8,500 feet. To the east flows the mighty Columbia River, harnessed to provide electrical power for the Pacific Coast and irrigation water to convert hundreds of thousands of desert-like acres into rich, valuable farmland. Cashmere is blessed with bountiful agriculture and close proximity to the wonders of unspoiled nature. The quiet peace of it’s rural setting with the surrounding forests of pine and fir and abundant populations of deer, elk, bear, coyote and native fowl is truly appreciated by local inhabitants.

Cashmere is home to an internationally famous fruit candy, fruit packing and processing industry and a world-class historical museum. It is also home of state champion athletic teams and schools meriting national acclaim as innovators in public education. Those who live here are looking forward to a future that is as colorful and exciting as it’s past.